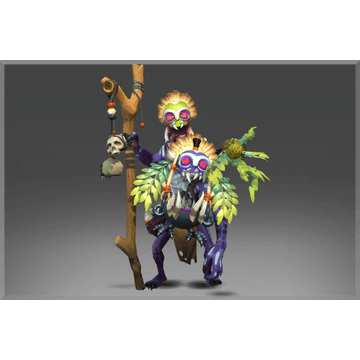 immortal
Used By: Witch Doctor
Though the origins of Zharvakko's brand of arcanism are somewhat murky, and largely apocryphal, the exploits of the influential healer Awaleb are known far and wide. In an age of famine, disease, and unending violence, Awaleb concluded that the ailments of his people amounted to mere symptoms of a much greater sickness. So he began to turn his legendary cauldron towards the dark arts of harm. His people could always trust his word and prescriptions, but his greater act of service to them was a willing corruption of sacred vows in the name of protection, and the twisted legacy he would leave behind.

Masque of Awaleb Bundle could be found in