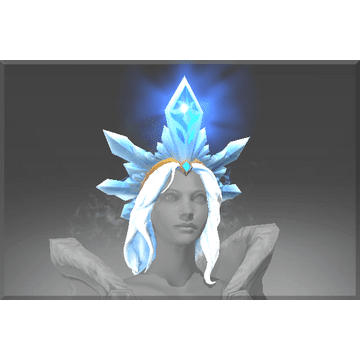 immortal
Used By: Crystal Maiden The International 2014
In the frigid north, that which is lost to myth may still be found within the ice. In an age now lost to time, the Frozen Witch Yulsaria ruled the whitelands, summoning blizzards and hail storms upon those who displeased her, while an army of ice golems roamed the lands to snuff out all warmth. In time, her southward expansion angered the Eldwurm Slyrak who, in his terrible rage, melted Yulsaria's armies with his endless flame before conquering the Frozen Witch herself. Now, centuries later, shifts in the ice have heaved up the last remaining shard of her empire: her glacial crown.

Yulsaria's Glacier could be found in